Why have you come to visit my site?
Let me venture a few guesses.
How do I know this?  As soon as someone discovers what I do for a living, these are the stories that come rushing out.  It doesn't matter what part of the world I'm in, the stories are the same, and I suspect that if I could time travel I'd find the same stories 100 or 1000 years ago.

Are you willing to do what is necessary to change your situation?
What is the Middle Path?
Middle path is about finding a healthy point of integration between extremes.  This is a concept that exists in many philosophies.  It's particularly prominent in the Greek stoic writings and in Taoism - two strange bedfellows.

Here's an example of what I mean as it applies to management:
Many managers struggle with the task of delegation.  Some tend to over-control and micro-manage while others tend to abdicate, assigning the task and walking away.  The most effective managers find a healthy balance that takes into consideration the experience and personality of the employee, the urgency of the task, and the importance of the task.  Note that I don't see this as a "compromise," but of integrating the healthy aspects of the extremes.  The healthy aspect of control is maintaining your personal accountability for the team's performance.  The healthy aspect of abdicating is giving your team member room to try things and make mistakes.

And another as applies to relationships:
The German philosopher Martin Buber proposed that there are fundamentally two types of human relationships.  "I-It" assumes that the other is an object rather than a human being.  The "I" does not consider the wants, needs, hopes of the other, but treats them in a purely instrumental way.  "I-You" is based on mutuality.  The "I" treats the other as fully human and considers h/her wants, needs, and hopes as equally valid. Buber treats these as two ends of a spectrum, but I suggest that "I-You" is actually the healthy middle path.  The other extreme is "It-You".  This is the relationship in which there is no "I".  The subject treats themselves as an "It", sacrificing their own wants, needs, and hopes to the other.  I suspect that Buber, being an assertive and confident person, overlooked this aspect as it would be quite foreign to him.
Middle Path doesn't assume a "one right way" approach.  There is a broad range of healthy approaches.  This perspective can be applied to many areas of life.  At the top of this page is a table showing some more examples.

In my experience, when leaders, teams, and organizations are under-performing, they are caught in extreme mindsets and the behaviors that are driven by these mindsets.  How I help is by surfacing these mindsets, exploring ways to shift them to more healthy ones, and then choosing and practicing new behaviors consistent with the healthy mindsets.

A path from where to where?

Renowned economist Ludwig Von Mises said that all human action begins with a "dissatisfaction gap."  All consulting starts when the client realizes that the situation they have is not the situation they want and they currently are not capable of bridging the gap.

Closing any significant gap in a social-technical system, whether a serious technical problem, an interpersonal conflict, or a personal challenge, requires a journey through realizing we are stuck, understanding why I/we are currently stuck, exploring different approaches, and the discipline of preparing to act.  Anthropologist and author Joseph Campbell found this process to be deeply embedded in the stories in nearly every culture he studied and dubbed it "The Hero's Journey" in his book The Hero of a Thousand Faces.  Below is an adapted version of this story. 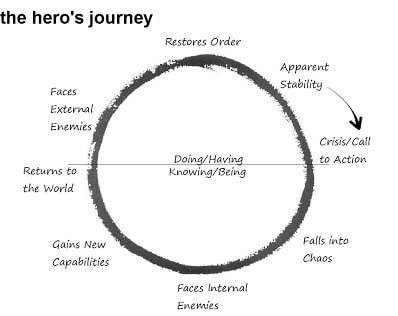 The "Path" in Middle Path is the one the hero walks as she departs from her current state and heads towards a more desired state.  There is no guarantee that she will succeed.  The trick is that there is more than just one path from here to there.  There are dangers in the paths of extremism - either on the aggressive or passive side.  Success lies in both knowing the stages of the path and avoiding the seductive extremes.

In working with individuals, teams, and organizations, I've found this metaphor very helpful in understanding how to solve problems effectively.  For the sake of simplicity I've conceptualized the Hero's Journey into four stages. 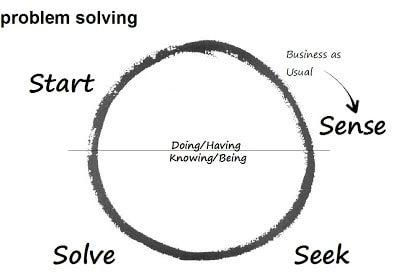